On Monday we finished Bridge to Terebithia. Oh wow, that was very, very sad, interesting and sad. And a little bit more sad. I had a lot of fun listening to it up until where – I don’t want to spoil it – but, yeah, something happens. I also went to the park. It was very fun to play. I like the new equipment at the park. I played one round of capture the flag. No body was really doing anything because everyone was just standing around to scared to go, so I just had to do something to make something happen so I ran for it. I think I got the flag but I don’t remember. Then I went to Reader’s Workshop at the library and I found some books that I liked. I found one that I really like it’s a graphic novel and I tend to not like graphic novel, but I was really happy when I found it because it’s easy to read and it’s really long. It’s called Smile and it’s got a big smiley face on the front.

Tuesday I did the cooking class where we made a broccoli salad which was delicious and amazing. It was so fun to cut all the things. I cut an onion because I’m really good at cutting things small, so when I’m on a team they always ask me to cut the small things. We also made a macaroni salad which was really delicious and I brought it home the next day because it was so good and Melissa said I could bring it home. While the people went to the play called Snow White, which some of you are familiar with and some of you are not, it’s one of those princess plays that some people like, but I do not. I did stuff but I don’t remember what it was. At the end of the day I went to A&P and that stands for Anatomy and Physiology. That was really fun because we did something outside where somebody traced your body and you traced your partner’s body and the teacher would say a bone of your body and you’d jump on it and she’d say another one and you’d jump on that. Since I didn’t know all of them, I looked at Alona and if you haven’t read her blog she’s 13 and studies the body a lot and she knew all of them, so everyone was looking at Alona. Elisha couldn’t see Alona but she could see me and she knew I was looking at Alona so she could jump on the right places.

Wednesday I don’t know my week was so amazing but I’m pretty sure this was probably my favorite day. We made small books which was the highlight of my day along with Writer’s Workshop. If you don’t know what that is you could probably look at other people’s blog to know what it is. 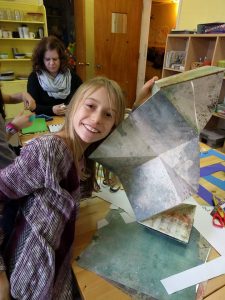 This is what one of them looks like. I made a couple other ones that are more simple and smaller. And as you could hear I like small things so I made a bunch of the little small ones. It actually looks really hard but it’s actually easy when you do it. I can’t explain the hard one. It’s a lot of folding and pushing and taping and putting on things. The smaller one is easier and you take a long strip of paper and fold it back and forth and back and forth until you have spring or as I like to call it an accordion. You take a little piece of cardboard a little bigger than your little accordion and then you take whatever you want the cover to be then you put double sided tape on one of the sides and you glue it to your piece of paper. And you want this piece of paper to be bigger than the cardboard because you wrap it around the side. Then you wrap it and cut the corners off. You put the double sided tape on the cardboard. And then you fold the sides of the paper on top of the cardboard. This is probably hard to follow so I will make a YouTube video that shows you how to make it and then you can look if you are really interested in it. It’s really cool. Since I’ve been explaining the small one that looks like an accordion I’ll start with that one. It looks like something I bought from a store and gave to someone.

Thursday I hiked a 5 and a half mile hike really fast. Fast for hiking, I wasn’t running the whole time, but it was inbetween running and walking. And I’m really proud of myself because I’m thinking about backpacking in a couple months and I was thinking that was a start to my training for backpacking. That is it for Thursday, but still I’m really proud of myself for hiking a 5 and a half mile hike. Oh and Crossfit was an interesting time because I’m already sore in my legs from hiking a five mile hike and then the first part of Crossfit was there was this song called “Bring Sally Up and Bring Sally Down.” I call it the torture song now because it looks easy but man it is hard. You start if you were doing a push up but you are all the way to the ground, you go up then you go down and then you go up and then you go down. They sing more of the song “Bring Sally Up, bring sally down and you hold it for more singing.”

Friday I did Spanish Market and we played a game. And then I did Cycling Savvy and we learned the professional way to stop and start and the check before you ride your bike. Then I helped Elisha look for her phone. My mom is here and we need to go and that’s why friday is not very detailed.